You are here: Home > Applications > Plastic and Rubber Extrusion Control

One of the most difficult and commonly seen control problems is the proper control of slow temperature loops. This is because of the large mass of material that these loops usually involve. In a heating loop, for example, both heating power and time are required to heat the system (long deadtime issues). Then, once the temperature starts to rise, it will increase slowly but steadily, and will tend to continue to increase for some time, even after the heating device has been turned off due to the problem of thermo momentum. Hence, one often ends up with a large overshoot and oscillatory response (with a very long cycle time).

Such a problem is further aggravated in Extrusion Barrel Temperature control because there are typically multiple barrel zones in an extruder. While each zone behaves differently, they also affect each other. The cooling process further complicates the issues since cooling and heating behave very differently. Finally, shear energy from the screw also affects temperature within the system.

MANTRA Software includes a specially designed control strategy incorporated in the Temperature Control Module (TCM) such that each stage of the control is treated differently, since different requirements are imposed at different stages, such as tuning stages, start-up stage, initial control stage, and run-time production control. With the use of TCM, all these internal stages are transparent to users. After configuring the TCM block, only one start button is required for a user to commission TCM control.

TCM is an advanced control solution that takes into account all the challenges of extruder temperature control, specifically: 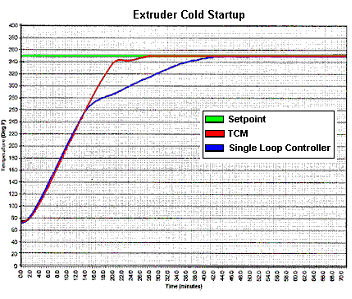 As the Figure illustrates, even a well-designed PID cannot match the performance of the MANTRA TCM block.

ControlSoft’s solutions featuring MANTRA TCM technology can increase the profitability of your process with no replacement of existing hardware or wiring required.